…not the e-Discovery Army you might want or wish to have." 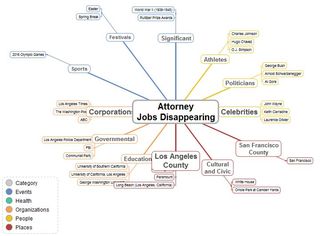 I don't think I've seen a story re-blogged, re-tweeted and/or re-everything'ed – at least among those who I monitor – as much as the "Armies of Expensive Lawyers, Replaced by Cheaper Software" article that appeared recently in the New York Times.

First of all, we need to remember what headlines are; short statements designed to entice one to inquire further, also known as 'teases'.  Mission accomplished!  Nothing like combining the words, "Expensive Lawyers", "Replaced by" and (horrors!) "Cheaper" in a headline to achieve a visceral reaction.  And the tagline (ouch!), "Smarter Than You Think"?  Really, New York Times?  Without the guidance of humans?

Perhaps you should have looked behind the set to see how Watson was able to apply context to Jeopardy questions.  Coming from a programming background (and I mean, waaaaaaaay back), I was more fascinated by the fact that it got the 'simple' question wrong.  What I mean is, on a binary (0/1, pass/fail or right/wrong, if you prefer) issue, Watson 'thought' Toronto was in the United States – even when the question clearly stated that the correct answer was a city in the United States.

My 2nd-grade teacher, Mrs. Blythe, said, "Always read (or listen to) the entire question (or instruction) and make sure you understand it before proceeding (or buzzing in).  Ok, she never mentioned anything about buzzing in.  How did she illustrate this lesson?  When we walked into class one day, we saw that she had placed a long list of tasks on a chalkboard, all numbered.  Each task was below the other.  She said these were the tasks we were to perform and to simply begin.  Everyone did, except for one person, who remained in their chair.  Why?  Because the last task on the list said, "#10. Do not perform any of the previous nine tasks.", and only one student read them all as opposed to one-at-a-time (No, I'm not going to tell you if I'm the one who read #10.)

When I first saw the NYT article last week, I was going to jump all over it – then I decided to wait.  I was curious how my colleagues would react to it.  Some simply repeated it through Twitter or their blogs, others added a few comments one way or the other (of course I haven't seen them all) and – not surprisingly – Ralph Losey hit a home run, in my opinion, with his analysis.

By coincidence, the same day the NYT article appeared, the LA Times wrote, "Retail jobs are disappearing as shoppers adjust to self-service".  See any parallels?

The issue, as I see it, has nothing to do with jobs.  It has everything to do with efficiency.  I'd also note that while document review – which is what the NYT article is really talking about – is a component of e-Discovery, e-Discovery encompasses much more than document review.  Think strategy, for example.  Watson may be a genius, but 'he's' unable to reason when your opponent is hiding evidence.

Years ago, a headhunter offered me some document review work.  She was paying $25/hr.  At the time, a checker at my local Albertsons supermarket was earning approximately $30/hr and was about to go on strike to demand more.  Prior to that, at the nadir of the dot-com bubble, I'd watched as a plethora of good technology jobs were outsourced to India.  This is what free markets are all about.

I'm not a fan of the language of progress as expressed in corporate meetings.  Matrix, metrix, service-levels, deliverables…ugh…so robotic in nature.  Maybe that's why I migrated to consulting.  But I'll tell you one phrase I – and employers – do like.  Value add.

The focus seems to be, "The machines can now do what I can do!".  To me, the focus should be, "What can I do that the machines can't do?  How do I add value, the result of which is, I'm needed in addition to the machines?

When you ask yourselves that question, you'll always be one step ahead of technological advances, rather than chasing them.