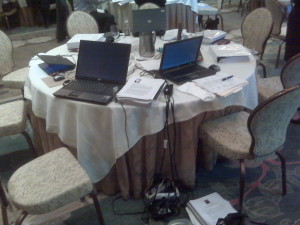 How did we get into this mess in the first place?  Take a look at the photo I snapped with my Curve.  That’s the panelists’ table – where they hung out as they rotated in and out of their particular sessions.  Click on it and look at a larger view.  See that ‘octopus’ on the floor?  One panelist opened his bag to retrieve his business card for me, and a quick peek revealed his version of Noah’s Ark…TWO OF EVERYTHING!  What else could I name the photo except, ‘MICROCOSM’…

An informal poll revealed that about 2/3 of the attendees were attorneys.  I’m not sure whether to be disappointed in this or not.  It does tell us that attorneys are trying to come up to speed, but I wish I saw more IT people there.  My view is that it’s the lack of each groups’ understanding of the other that is a big part of the problem.

What I liked about the organization of this conference was that it was a well thought out progression.

Day one started with an excellent overview of the various issues we face.  It began with the typical “State of the Industry”, which highlighted survey results regarding e-discovery (some of which I’ve featured here previously).  They then moved on to litigation readiness, project and process management and cost controls, a discussion of the lack of planning, testing and the obvious pain that would result, and finished up with a discussion of ethics.

The highlight was the luncheon with the Judges’ Panel.  More on that later…

If you’re someone on the cusp, just getting into this process or are a project manager, you got a lot out of day one.  If you’re a reader of this blog, you’ll know that I’ve covered the very same things here.

Day two, a half-day, was the meaty day for me.  Any time someone is discussing Daubert (in California we call it Kelly/Frye), you know this isn’t going to be simplistic…

They started off with an in-depth look at search & analysis.  Finally, someone is explaining the mess you’ll receive if you don’t understand HOW to search!  If I received a dollar for each time I’ve heard, “Just put a paralegal in a room with the material – that’s all you need.”, I’d be wealthy.  This panel brought that point home.  You’d better know what your strategy is before you make a single search.

The second panel was about working with Special Masters, neutral experts and expert witnesses (that’s where Daubert came up).  Obviously, most Judges know as little about this as the lawyers do, and that complicates matters.  It was a frank discussion of getting all of your ducks in a row, making sure your ducks quack at the appropriate time and knowing what they’re quacking about.

The third session made me chuckle, because I just wrote about it this week – hand-off.  One panelist even used the same word I did; Ownership.

Finally, the conference ended with a discussion of document review and contract attorneys.  I had a prior engagement and was unable to stick around for that one.

I think my biggest suggestion to the organizers would be, if they want to attract more IT people, the panelists must take the extra moment to describe the laws they’re discussing.  For example, when they quote Rule 502, they must keep in mind that the IT attendees – and probably a lot of the attorneys – may not know what that means.

To me, the conference was mostly about the State of the Union – what we’re doing today.  Where I thought we really delved into the future was the Judges’ Panel.  I could barely keep up with my notes, the information was coming so fast!  When I heard a Judge describe e-discovery as a “train wreck”, I knew I’d better pay close attention.  I wasn’t disappointed…hopefully you won’t be, either.