[…and what to do if you’ve already upgraded]

Windows 10 was released in late July to a lot of fanfare.  Even as a ‘tech-guy’, my rule of thumb is to never install an upgrade to a Windows operating system until Service Pack 1 is released.  But, as is true with many other users, Windows 8.1 (and Windows 8.0 before it) was a big disappointment to me and I figured anything would be better than standing pat.  So, under the dual-philosophies of, “Tech, Heal Thy PC” and “Document it for my readers”, I installed Windows 10 as soon as it became available.

Good thing I know how to fix my technology.  On the plus side, you get to learn from my pain.

LOOKING UNDER THE HOOD

Do I regret doing it?  No.  Was it a successful upgrade?  Yes and no.  First of all, there are a lot of tweaks that must be dealt with, but other than being time-consuming, they weren’t particularly difficult.

What was difficult was that Bluetooth support disappeared.  What do I mean by disappeared?  I mean that, not only did it not work, the entire module was missing as if that feature didn’t exist on my PC.  It can be blamed on both Microsoft and Toshiba, my PC manufacturer.  As I found out later, Toshiba didn’t release Windows 10 compatible drivers until about a week after the upgrade was available (which strengthens my advice never to rush to upgrade).

But that was a week later.  I had a problem to address now.  I dug out my old usb mouse (my current mouse is Bluetooth) and got to work figuring it out.  When it comes to troubleshooting these types of problems, patience is a virtue.  There’s always an answer, but it may take time to find it.  In this case, the answer was simple: my driver didn’t work and I had to find one that did work.  The fix, on the other hand took time.  I visited both the Toshiba and Intel sites for support, but being unable to find drivers that specifically identified as being compatible with Windows 10 (or my PC model), I simply started with the next version up from my driver and continued a pattern of install/reboot/remove/reboot, install/reboot/remove/reboot until finally, Bluetooth miraculously reappeared!

Of course, I had to try a lot of drivers – and had a lot of other work to do – so that process took two days.  Not that bad; but the real reason I needed to repair it was that I connect to my smartphone via Bluetooth for other purposes.

Remember, I was willing to take the risk, so I’m fine with the results.  Are you?

As you’re already aware, some very talented people all over the Internet have written articles about functionality and features, but I want to focus on what attorneys need to know, and the most important item is that Windows 10 poses serious risks to your privacy – and the confidentiality of your client information.

You’ll want to start with the privacy settings (which can be located – predictably – under Settings > Privacy) but be warned, depending on your configuration, there will be approximately thirteen separate modules of privacy that you must review, and you’ll have to spend some time in each one (see below): 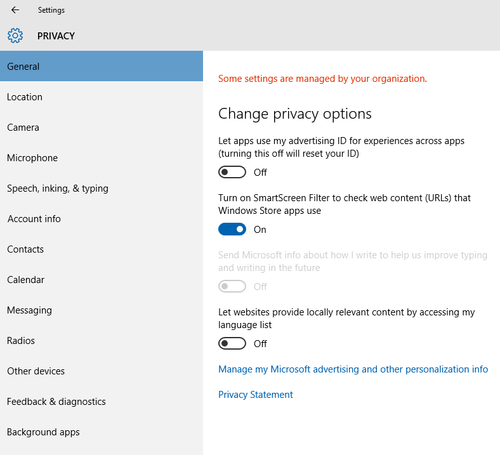 In short, you’re going to find yourself turning a lot of features off.  For most users, this will be sufficient.

For those who wish to go a step further, there are other settings referred to as Telemetry, which Windows 10 has embedded in the software.  It automatically sends your information to them – and it doesn’t provide a means to turn itself off.  I know what you’re thinking.  “I’m staying with my current version!”  That’s not going to work, because just recently, Microsoft began backporting its telemetry software to both Windows 7 and 8.

All is not lost, however.  There are tools available that will mitigate the problem. Personally, I recommend the aptly-named, “Windows Tracking Disable Tool”, which does exactly what it says.  This is a third-party program so as always, practice due diligence and be sure you understand what you’re doing as you’ll be installing it at your own risk.

There’s a lot of debate about installing various patches provided by Microsoft.  I fall squarely in the camp of installing them.  Over the past month, there have been several patches to Windows 10 and I can honestly say that just over a month out, it’s working much better than on day one.  And that brings us full circle around the track to where we began:  Service Pack 1.

For those who ‘do as I say; not as I do’, I guess you’ll be idling at the red light a few weeks longer.