If you're attending the State Bar of California 85th Annual Meeting this week in Monterey – or want to stay abreast of the action (because as you know, lawyers are synonymous with action…) there's an app for that.  Available for both Apple and Android devices, you can monitor the #CalBarAM12 hash tag on the fly, organize your meeting/CLE/reception calendar, find maps to various meeting locations and the city itself, share contacts dynamically and a whole lot more!

Folks, the Bar's effort here is truly impressive.  I'm very proud of my colleagues who made this happen.  Plus, the LPMT Section's Social Media SubCommittee gets a little credit as well – we named it and also created the companion hash tag. 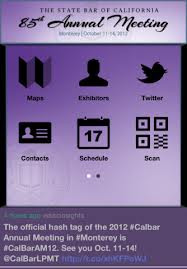 Soon, our Section will release our own app, so stay tuned for that announcement as well.  In the meantime, safe travels!

If you read Part I of this series, in closing, I asked whether the "bumper" solution was a good decision from a management standpoint.  My opinion?  Yes, but only if you look at it from a purely financial perspective.  From a customer service/relations standpoint, it's a disaster.

What's the 1st thing that comes to mind?  This isn't indigenous to Apple.  I've heard this song before.  Where do think the joke, "That isn't a bug, it's a feature." comes from?  I just think that with Apple's dedicated user culture, they have a better chance than most to pull it off; but that doesn't make it right.

I've spoken to career Apple customers who are so incensed by what they term the arrogant attitude of the company (usually referring to Jobs, specifically) that they've finally had enough.  Apple can afford to lose them, but that's not really the point, is it?

The difference between Apple and you?  They have a public relations issue and face class-action lawsuits.  You – and/or your management are likely to face serious sanctions.  But don't worry; that's only if something goes wrong…

If you're a long-time reader of this blog, you know that I used to post frequently about relationships between techies and management and how successful interaction between them is critical to the success of an undertaking; internally and externally.  As you can see from the headline, I'm using Apple's response to the iPhone 4G 'debacle' as a teachable moment.  Some will take issue with my use of the word debacle, but I'm speaking in terms of the negative press this issue has generated.  Caveat: I own an iPod Touch (but you already knew that).

If your initial thought is to wonder how any of this applies to eDiscovery, read on…

PART I:  STEVE JOBS IS RIGHT

Make no mistake.  Steve Jobs knows his customers – and so do I.  My first real exposure was when I was tasked with managing the only MAC network at Hughes Space and Communications (this goes back to 1993-94).  I quickly learned about the culture of MAC users.  As often happens to me – and many of you, I suspect – once that item was on my resume, the MAC element became a regular part of many of my future projects.

Stevie and I had a convo and we agreed on several points: 1) There's a hardware issue (not that we'll admit it), 2) the problem affects a relatively small number of customers, 3) a plurality of dedicated customers will back us, no matter what we do, 4) if we're forced to issue a recall, it could cost billions, 5) we know that a bumper/case/duct tape will solve the problem (not that we'll admit there is one) for most customers, so 6) let's go that route and offer a free bumper/case/duct tape (sorry, couldn't resist that last one).

If you've perused articles on the issue – and read the accompanying comments – you'll probably note that the scenario has played out the way Stevie and I thought it would.  Overall, reaction has been favorable, and every time someone posts an article or comment critical of the solution, they're usually swamped with 'the faithful' calling them whiners and defending Apple, usually making the effort to express how much they love their iPhones.

So, was it a good decision from a management standpoint?  And where's the eDiscovery tie-in?  I'll bring it all home for you in "Part II: Steve Jobs is Wrong"…

Steve Jobs.  Fake Steve Jobs.  Apple.  iPad.  There.  Up until now I've been the only online source that hasn't mentioned the iPad this week.  But this post isn't about that.  It's about how a technology writer at Newsweek can't even figure out that when he makes a claim, someone will produce the email trail.

Daniel Lyons (who blogs as Fake Steve Jobs) stated on the CNN program Reliable Sources that when he was hired at Newsweek, Apple sent a message through a former Newsweek writer, Stephen Levy, that they wouldn't treat Newsweek too kindly due to Lyons' inhospitable treatment of Jobs in the blog.

Problem is, it wasn't true, and what probably should have been no more than idle gossip at the water cooler is now plastered all over the 'net.  My favorite line?

"But naturally enough, in a story about technology reporting, there is an
electronic trail to unravel."

I'm sure Lyons thought he was just slightly embellishing a story to make it more interesting, but the result was that a relatively banal comment blew up in his face…