In honor of the ABA Techshow (going on right now), please have a look at the ABA Journal's latest cover story, "Tracking Techies". 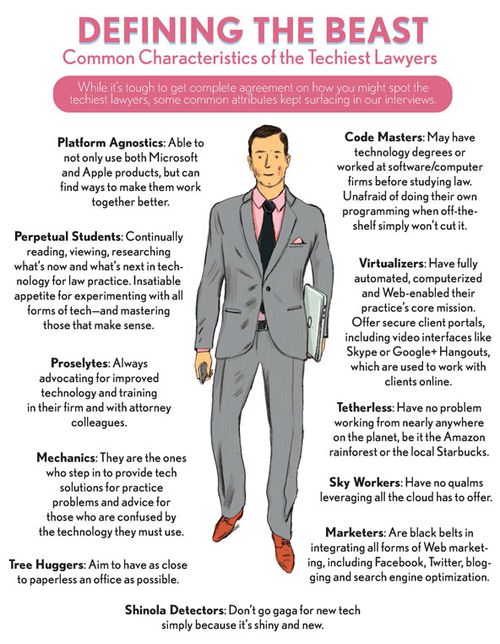 Dagnabit!!!  I sneak away for an impromptu break and what happens?  My blawg is selected by the ABA Journal as one of the top 100 law blogs of 2010!  What does this prove?

Oh, and regarding that shameless promotion-thing, the voting's not over.  If you like, you can click on the banner above (or here) to vote for my blog in the "Legal Tech" category.  Voting will remain open until December 30th.

Once again, thank you for supporting my blog.

Nothing like a Friday afternoon to examine six volumes of law & technology statistics from the ABA.  I was somewhat amused when I accessed their page and discovered that they’d received an endorsement – from yours truly.  Somebody apparently liked something I said about last year’s survey and quoted me.

The ABA provided me with some excerpts, so I reviewed them and picked out a few that I thought would be of interest.

Usage of newly released Windows 7 (9%) has
already surpassed that of Vista (8%, compared with 9% in 2009 and 4% in 2008)
as the second most frequently reported operating system on respondents’ primary
computers.

When asked whether they personally maintain a
presence in an online community/social network such as Facebook, LinkedIn,
LawLink, or Legal OnRamp, overall, 56% of respondents answered affirmatively,
compared with 43% in the 2009 survey and 15% in the 2008 survey.