Word came down this morning that the Supreme Court of the United States has agreed to review Cheney v. Bush, et al. I can’t say I’m surprised; but I wonder how they’re ever going to to discern the truth, based upon all of the conflicting testimony.

An old Jewish proverb:  Put two Jews in a room and you'll get three opinions… 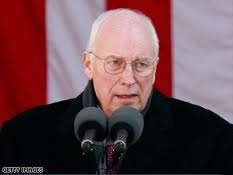 Word came down this morning that the Supreme Court of the United States has agreed to review Cheney v. Bush, et al.  I can't say I'm surprised; but I wonder how they're ever going to discern the facts, based upon all of the conflicting testimony.

To briefly review (for those who may be unfamiliar with the details), in August 2011, Cheney testified to a series of events that took place In His Time.  He placed himself at the center of both terms of the Bush (hereinafter referred to as "W") administration.

Colin Powell, the Secretary of State in W's first term, filed suit in response.  Deposition being held on Face the Nation, Powell contradicted Cheney's testimony and in fact, testified to an entirely different series of events, likening Cheney's account to that of a 'supermarket tabloid'.

This was just the beginning.

Cheney, apparently unaware of – or unwilling to – abide by the Decision Points testified to by W himself in 2010, also contradicted the former President's account.

In tears, Condoleezza Rice came into my office and told me that I had been right; then made known her intention to join on the side of Powell.  Aside from stating that there was No Higher Honor than serving in W's administration, she's remained mum up to this point.

Her deposition is scheduled for November.

Sources also predict Tenet will enter the fray.  Reached this past weekend At the Center of the Storm [Irene], he said it was a Slam Dunk that a cross-complaint against Cheney was imminent.

Rumsfeld was queried about his intentions.  He responded, "I know that I know what I'm going to do, but I don't yet know all that I could know, and on advice of counsel, I'll wait until all unknowns are known before you'll, ah, know."

The moral of this story?  These are some of the most powerful individuals in the world, yet even they can't agree on a critical series of events.  Of course, some of this is by design and clearly self-serving – and some is not – but that's the point, isn't it?

Welcome to the wonderful world of litigation…