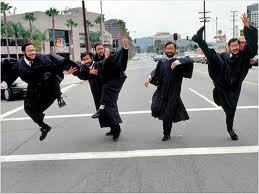 I'm sure you've noticed I'm using hash tags in my subject titles.  I picked up a lot of followers on Twitter during the conference and the former tag allows others following LTWC to find my summaries easily.  If you're already following me, you've seen the latter tag before.  We'll get into that, below.  As always, my disclaimer from my Day One post remains the same.

I am the man of steel!  Ok, maybe I'm the man of aluminum!  Ok, I'm thinking more along the lines of the man of caffeine.  I attempted to do the impossible; attend every single session available on day two.  I'm sure plenty of others do so, but I'll admit, when you do this, coupled with quick meetings prior to the commencement of the day, on every break and even afterwards, I can't speak for others, but I resembled some kind of zombie by the time I approached the parking garage (ask the person who met with me at the end of the day).  You know why?  Because, save for the final session, I sat in the front row (which is something I always do).  For one thing, I'm live-commenting on the event via Twitter, plus, it keeps me engaged, which is important because I'm there to drink in every bit of knowledge I can – not to sit in the back and collect CLEs (not that I don't love CLEs…).

The keynote, "Trial by Sound Byte", was given by Manny Medrano.  I've met Manny before and if you're from the L.A. area, you've likely seen him on local networks, covering cases like the OJ Simpson murder trial.  Manny's a very personable guy and is even more so as a speaker.  He contrasted his desire to cover hard news cases with the network's desire to cover celebrity cases, such as the death of Anna Nicole Smith.  He focused heavily on the issue of media coverage and how it may interfere with justice rather than simply telling the story.  Put simply, news reporters and networks are as apt to let the confidential cat out of the bag as social media users.  He cited a few examples (some that we've covered on these pages) but what I liked was his hard-line approach to violators.  He believes in harsh penalties (monetary, if possible) when there are egregious instances of juror misconduct.  I agree wholeheartedly and have said so many times.  Closing observation: this is probably the first time I'd heard the term, 'Dancing Itos', since 1996.  A decade later, during the last criminal case I worked on for the D.A.'s office, the day the verdict came out, our sitting judge took ill, so we had a substitute.  I walked into the courtroom and sitting at the bench was none other than Judge Lance Ito.

On to session one, covering "Electronic Discovery in the Cloud", with the 'legend', Tom O'Connor.  He was supposed to be presenting alone, but was joined later by Brett Burney.  This was an unexpected treat for me because last year, I stood in for Brett at another conference when he was stuck in Ohio and couldn't come.  The whole thing was hastily arranged and I basically did it sans notes.  Brett and I had never met in person, so it was great to finally put the face to the name.

This session was a perfect antithesis to the cloud presentation I attended on day one.  Here, we covered all of the risks & rewards of cloud computing.  In particular, the biggest bone of contention is how much control the vendor retains over the data.  In some cases, a law firm that agrees to those terms may actually violate their code of ethics by turning control of confidential client information over to another without their consent.  This was a more sobering – and in my opinion, more realistic – overview of what cloud computing is all about.

That's when it hit me; as far as your data is concerned, the cloud is like a digital roach motel.  Your data checks in, but it may never check out.  Or, for a little California emphasis, call it the Hotel California.  Your data can check out any time it likes, but it can never leave…

Time for the lunch session, "A View from the Bench" which was led by two Federal Magistrates, Jay C. Ghandi and Suzanne H. Segal (no rel.).  Judge Segal presented to my litigation group only two or three months ago on jurisdictional matters.  I'm presenting an eDiscovery CLE to the same group in about two weeks and if I could just get the videotape from this session and play it, I'd let my attendees watch it while I sneak up and eat all of their cream-cheese desserts.  It's exactly what I'm going to be saying, which is, in a nutshell:

*Sigh*  The latter statement seems to be more in force in Federal jurisdictions, but I suspect that – in California's case, anyway – that's because our rules came into power in 2009, not 2006 like the Federal rules.

The judges presented us with a hypothetical scenario regarding a corporate sexual harassment case and we analyzed the mistakes that were made during the process.  The gist of the issues were more focused on a paralegal performing attorney functions and making decisions that only an attorney may make, but what bugged me most was that, in a personal misconduct case, when the misconduct was reported, the paralegal contacted the subject of the accusation.  This particular fact tidbit had nothing to do with their presentation and was likely just a by-product, but I would say this to you.  If you become aware of that type of misconduct (which will trigger respondeat superior), here's my advice.  Do not pass go.  Go directly to whoever is responsible for overseeing these matters, call the accused into a meeting, have them sign a document informing them of the complaint while simultaneously arranging to collect an image of all of the person's data that you can.  And do not let them access any of it until you're done.

Why?  Because your job is also to protect the corporation; and the corporation may be held liable for any additional misconduct of its members.  If you inform the accused perpetrator, what might they do?  Go back to their office and start deleting incriminating emails?  Who knows?  The point is, you must issue a true litigation hold on the spot and preserve an image of all of the information you can.  Think I'm being harsh?  I know of organizations who do this, exactly.  In fact, one of them will put the accused on leave without even informing them of the basis of the accusation.  Doesn't that sound like being found guilty, until proven innocent?  Yep.  Welcome to Corporate America.  But I digress…

Next session was "The Top 5 Ethical Concerns for Lawyers in E-Discovery", presented by Brett Burney (again, who I didn't know was going to be there).  This was a nuts & bolts session and was very clear.  The slides spelled out what our duties are, what the rules say (both eDiscovery and ethics), the supporting and dissenting case law and links to resources.  Obviously, the longer one has occupied this space, the more one knows of these matters, but I've never thought it to be a bad thing to attend a refresher.  It's very easy to forget.

Here's what I have to say about the last session.  Do you recall what I wrote yesterday about the first session?  Ditto.  My brain was fried at this point, anyway.  And so, we shall not speak of it again…

All in all, a great conference for me.  See you next year!