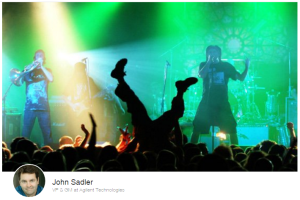 As a (former, recovering, retired) musician, I relate to this post by my friend, John Sadler:

Playing music in a band is a team activity that can be complicated by the ego issues and creative preferences of the band members, as well as role ambiguity. Over many years of playing music with other people, I’ve learned some behaviors that help a group work well together musically, and others that can make it fall apart. Many of those lessons port nicely to other team activities.

The biggest element of success in a band is to show respect for your bandmates. Other necessary conditions include:

Show up, on time – Clarinetist (among other vocations) Woody Allen has been quoted as saying that “Eighty percent of success is showing up”. It’s important to be dependable and do what you say you’re going to do. It’s equally important to pick bandmates who do the same.

Come prepared and in tune – don’t waste your bandmates’ time by playing your part poorly or wrong if you could have practiced it beforehand. Similarly, nobody wants to stand around while you set up and tune your instrument. If you have a complex kit, show up early and be ready to go when everyone else is.

Listen to the band – not just yourself. A great bandmate is a great listener, and will adapt his or her performance to make the band sound as good as possible. There is a lot to this. When you accompany, your job is to make the soloist sound great. What you don’t play is at least as important as what you do play. Leave space! (AKA silence). Get used to hearing yourself in the context of the band to get a feel for the right volume level. If you’re accompanying a soloist or a singer, make sure you’re not too loud – you may even lower your volume so the featured performer stands out in the mix. What sounds like the right volume when you practice may be way too loud in the context of a band. When you solo, you need to be a bit louder; more importantly, others need to back off. If in doubt. record the performance and listen carefully.

No drunks, no jerks – it’s hard enough to make great music without impairing your ability to think and perform. Give yourself every chance to have sound judgement and the best possible control over your actions. Check your ego at the door as much as possible – there needs to be honest give and take to make great music. You may think that you are a creative genius, but the odds are against it. Few team efforts are improved by verbal abuse, ego games, or infliction of emotional distress. A great band can rise above the limitations of its individual members if everyone is working well together.

Take mistakes in stride – the audience notices how you react to mistakesmuch more than the mistakes themselves. It’s OK to make a mistake. It’s not OK to call attention to it while performing. If someone makes a mistake (and everyone will) during practice, keep playing and have a critique at the end of the song. Remember that you will make mistakes as well – treat people kindly. They’re supposed to be your friends.

Everyone should have a chance to contribute ideas to improve the sound and performance. Everyone should be able to try ideas, especially during practice, that might result in a better sound. So mistakes have to be OK in order to perform at the highest possible level.

Expecting mistakes to happen and handling them with grace is a huge life skill. As bassist Victor Wooten points out in his excellent book The Music Lesson, a “good” note is never more than one fret away. Did you know that you can practice recovering from mistakes, the same as an astronaut practices dealing with emergencies?

Discuss and align your goals together – this one issue is responsible for the demise of many bands. You and your bandmates must agree on goals, whatever they may be, in order to form a cohesive team. If one person needs income or commercial success while the rest want to jam on the porch on a Sunday afternoon, you have a problem. You must decide what kinds of music you will play, what the roles of the members are – to name a few:

Finally, a couple of ideas for performance:

Play it the way you practiced it – Conversely, if you practice poorly, you will perform poorly. Good practice skills are highly underrated! Here’s one pointer that is easy to miss and hard to learn, but works exceptionally well: go slow to go fast. Practice only as fast as you can play smoothly and without mistakes. Speed up the tempo gradually. If you practice too fast, you will be teaching your muscle memory to make mistakes, and you will never play your part well. This general principle applies to almost any physical activity.

By the way, most great soloists practice their solos. Really. They don’t just step up and fake it unless they have to. Yes, there are exceptions, but I’ll bet they worked very hard to become exceptions.

Don’t stop until the song is over – Starting and stopping together are the second steps to sounding like a band (the first step is to play the same song together in the same key and tempo). You need to agree as a band on how you will know the song and tempo, how it will start, and how you will know when to end it. These things do not happen by magic. They happen by agreement, by knowing the material cold, and possibly by years of playing together.

Those are a few lessons I’ve learned the hard way by playing bands since I was a kid. I think many port nicely to the workplace. What do you think?