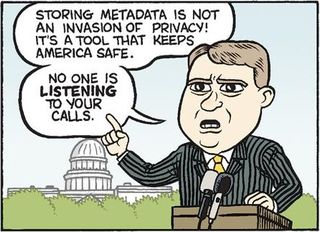 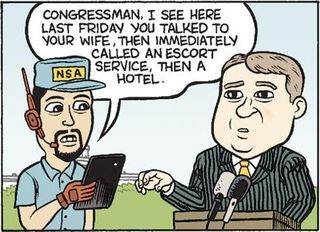 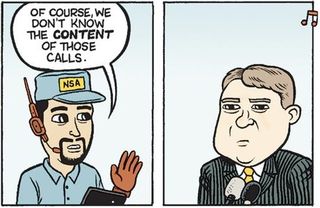 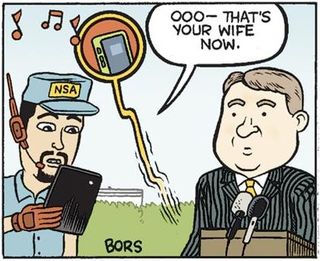 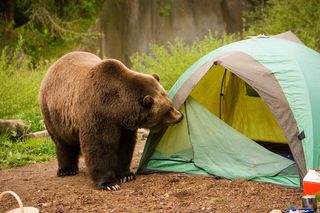 The Guardian US interactive team has posted, “A Guardian guide to your metadata“; and for anyone who is still bewitched, bothered and bewildered by the concept, I urge them to take a look at this interactive demonstration.

What’s also interesting is that one of the examples they use is the Petraeus scandal, just like I did a few months ago.  The reason it’s such an excellent learning tool is that individuals tend to worry about their own metadata, completely ignoring their risk of harm by others’ metadata.

Obviously, with the strange happenings at the NSA, this might be the perfect time to understand the world around us a little bit better. 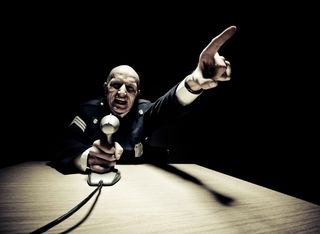 Today's General Counsel Institute (Formerly the Executive Counsel Institute) held the San Francisco stop of their "eDiscovery for the Corporate Market" series, nicknamed "The Exchange".  Prior to this, I'd only attended in Los Angeles – and only the first day – but I was on a couple of the panels this year, so attended the entire one-and-a-half-day event.  The moderators for this location were Browning Marean III, Robert Brownstone and David Kessler.

This format is still working for me, folks.  The roundtable approach and ability for all attendees to participate is simply a great way to info-share, and as I've mentioned in prior summaries, the vendor attendees do not overpower the conference with blatant pitches.

Most importantly, I learn something new every single time I attend; and that's the point, isn't it?  Let me share with you the sessions that were covered this year:

And most importantly, several coffee breaks…

Every flavor of eDiscovery professional is represented at these conferences, from lawyers to techies to support staff; and each brings to the (round)table their real-world perspective of what they see on a daily basis.  Practical information, not theory!

I encourage you to check it out the next time the conference is in your area.

I’m sure you all know by now that I don’t venture into scandals, per se, on this blog; except when they involve our area of examination: Technology, privacy, evidence and eDiscovery.

That said, I’ve certainly been following the messy Patreaus developments, becoming more and more interested in the Gmail connection to all of it.  None of the initial stories answered my question; if a woman was allegedly being harassed by Paula Broadwell, why did they need to monitor her (Broadwell’s) Gmail account, since the victim would be the recipient of all of the emails, and have them in her possession?  It suggested to me – and probably to some of you – that the harassing emails were probably being sent anonymously and had to be traced back to the source to specifically identify who was behind them (Broadwell).

This morning, we received confirmation.  Naturally, the situation is going from bad to worse faster than you can say, “October surprise”, but for our purposes, the interesting link is the metadata (specifically rich location-data) gleaned from the victim’s inbox, which provided the trail back to Broadwell by linking her physical whereabouts to the devices that were the sources of the emails; which ultimately led back to Petraeus through clandestine emails in Broadwell’s – not his – inbox.

Got all that?  Good.  And what are the things that bother me (I refuse to utter the oft-annoying “raises questions”)?

Considering both Petraeus and Broadwell apparently set up anonymous Gmail accounts specifically to facilitate carrying on their affair, it once again calls into question the very knowledge, training – and self-awareness – of those who we charge to protect this country and its secrets.

Simply put, if even Petraeus doesn’t get it, who the he** does???

What we think is not the same as what we know.  I've been following the, "I own 50% of Facebook" lawsuit, but I admit, until I drilled down into the minutia, all I knew for a fact was, Plaintiff had refiled the case and included some damning email messages, and Defendant stated the emails are fake.  Since the suit prominently features ESI, I wanted to better understand the issues.

No doubt about it, this is a true eDiscovery whodunit.  I read a few articles and this is what I've learned.  Ceglia claims he owns 50% (or more) of Facebook.  Facebook claims he doesn't.  That's right.  That's all I know.  I certainly read some fascinating excerpts, though.

However, I can point you to article after article that purports to know more, but doesn't.  Don't get me wrong; unless one is writing a factual piece, there's no journalistic requirement to state only facts.  I actually learned a lot of valuable factual information from the linked article (notwithstanding the reputation of the author).  The problem – for me, anyway – is that law and speculation don't mix.  And opinion?  Expert opinion?

I sure would like to give you my answer, but the entire previous paragraph was pure speculation.  As soon as I used the word, "If"…

I'm not talking about the usual gamesmanship (and I shudder to refer to it as such) that occurs in heavy litigation.  There's always a certain 'cat & mouse' feel to the process, for want of a better term.  I'm also not talking about the more obvious example; when the client says something like, "This email from Tom?  I'm sure this isn't the entire thread.  Some of the conversation is missing."  That is something the client knows.  I'm talking about something that can't be taught, but is more instinctual.

Sometimes, things just don't add up.  The evidence is telling you that you're not getting the whole story.  Maybe you caught a tiny phrase in a depo that contradicted something you thought you'd seen in a document.  Maybe a witness referred to something in the wrong tense, which suggests to you that an incident occurred earlier or later than what was originally claimed.  Maybe you just look at the overall litigation puzzle and a piece is missing.  Maybe – and here's where it gets really tricky – something just doesn't feel right.  Now what!?!?!?

Remember when I said, "Know what you don't know?"

The problem is, attorneys are not allowed to go on 'fishing expeditions'.  A suspicion that evidence has been withheld isn't a reasonable basis to support a demand for more evidence.  So, what do you do?  Well, for starters, you can ask yourself if there are any other independent sources available (keeping in mind a subpoena may be required) where you might search.  After all, you may find the answer through the same documents you received as part of the litigation process.  Why?  Because perhaps what didn't feel right was that the documents you received were, 1) too new, too old or the wrong version, 2) altered in some way, 3) out of order or have pages added or missing, etc.

You'd be amazed what a simple internet search turns up…

Remember; what you discover independently may be the smoking-gun that forms the reasonable basis to go back at a party.

Sanctions, anyone?  How do you think people are caught?

You've seen a lot of discussion about electronic documents in native format?  Well, this is one – among plenty of other reasons – why you would want to receive them that way.  However, while the metadata will hopefully tell you what you need to know, it might not.  You may have a document that matches up properly with its metadata, but how is this going to guide you if you've been given the 'wrong' document – or no document at all?

I could go on and on at length, but the problem is, if you're in this position, you don't necessarily know what you're looking for; you just know something isn't right.  So, you have to trust your instincts and act on them – subject to the buy-in and resources of your client, of course.  Following your instincts isn't necessarily a cheap undertaking.

Ronald Reagan said, "Trust, but verify."  Bill Maher said, "Be more cynical."  I agree with both.  After all, you'll tell me the truth, but you'll probably disappoint me…

Nothing like a Friday afternoon to examine six volumes of law & technology statistics from the ABA.  I was somewhat amused when I accessed their page and discovered that they’d received an endorsement – from yours truly.  Somebody apparently liked something I said about last year’s survey and quoted me.

The ABA provided me with some excerpts, so I reviewed them and picked out a few that I thought would be of interest.

Usage of newly released Windows 7 (9%) has
already surpassed that of Vista (8%, compared with 9% in 2009 and 4% in 2008)
as the second most frequently reported operating system on respondents’ primary
computers.

When asked whether they personally maintain a
presence in an online community/social network such as Facebook, LinkedIn,
LawLink, or Legal OnRamp, overall, 56% of respondents answered affirmatively,
compared with 43% in the 2009 survey and 15% in the 2008 survey.